A potential limitation of this split is that it still lacks some terms to model x_i, x_j and r_{i\to j} as a whole.

Relation encoding can only encode the relation between neighbors. The authors extends it to multi-hop encoding using GRU over the sequence of relations:

The last hidden states of the forward GRU network and the backward GRU networks are concatenated to form the final relation encoding r_{ij} = [ \overrightarrow{s_n}; \overleftarrow{s_0}].

Their sequence decoder works similar to what people always use in sequential Transformer decoder:

How does Graph Complexity affect performance

Seems that their model works better when the graph diameter is large.

How far are these heads attending to 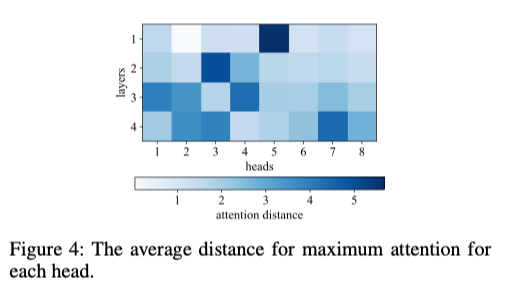 I don’t quite trust these attention heat maps, basically you get different heat maps every time you train a new model.

It’s not hard to come up with such ideas (using RNN for relation encoding), as there have been lots of paper encoding dependency relations along shortest path to the root. But I do admire their engineering efforts to make it work on Transformers.